In the mid 1960s I always wanted an Exakta. Now I have ‘some’ in my collection.

In my opinion these are lovely cameras, they are very well engineered and were quite advanced for their time. There is even a club for owners, the Exakta Circle. To visit their website click here.

The Kine Exakta of 1936 was the worlds first commercially successful 35mm SLR. They were made by the German company Ihagee, which was founded in 1912 by Dutchman Johan Steenbergen in Dresden (then the camera capital of Germany). He called his company Industrie- und Handelsgesellschaft  or IHG which, when pronounced in German sounds like “ee-hah-geh” which then became a shortened version of the company name. 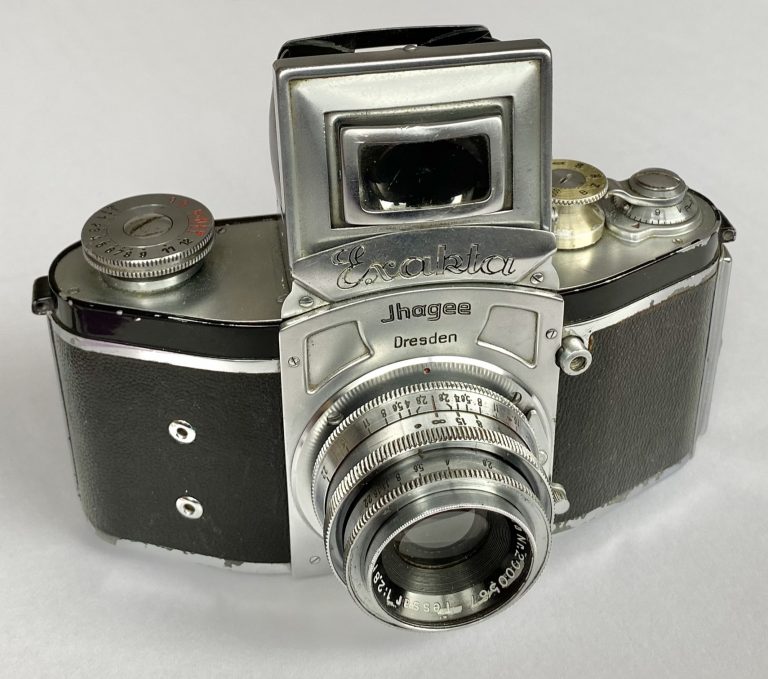 This camera, was known as the ‘Kine’ (35mm) Exakta to differentiate it from the earlier roll film cameras. It (and its Tessar lens) were made in 1937, and only differs from the original 1936 Type 1 by having a rectangular rather than circular magnifier.

After the War the factory was destroyed by Allied bombing, but fortunately parts and machinery had been moved to other locations and production was able to restart fairly quickly. Also, unlike other Dresden camera manufacturers, they were not nationalised or taken to Russia, due to its Dutch ownership.

From 1950 the post war Exaktas were known as the Varex. The Varex lla became famous as it featured in the Hitchcock film Rear Window. It was made from 1956 to 1960 and had the more attractive engraved “Exakta” badge. 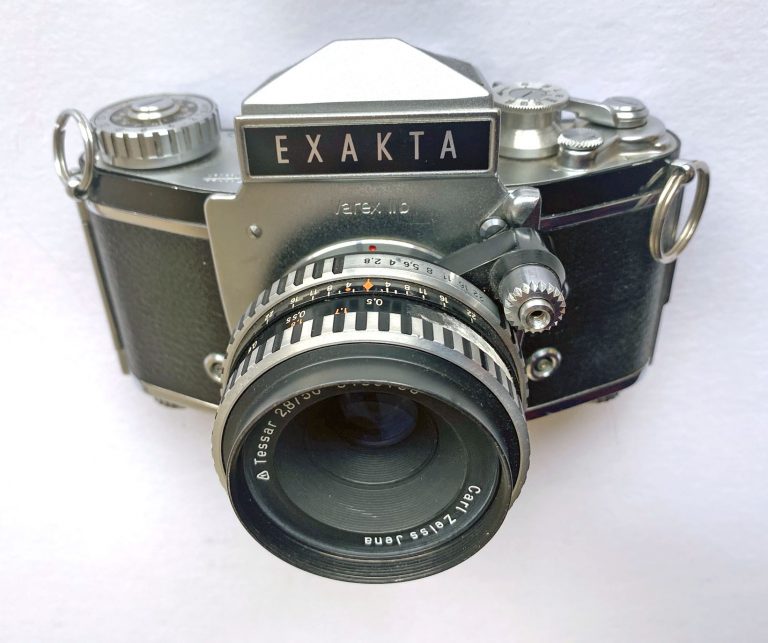 This updated version of the lla is the camera I lusted after in the mid 1960s, looking at one in camera shop in Bold St. Liverpool, but couldn’t afford it (I bought a Praktica instead). The lens is a Zeiss Jena Tessar. After the war Zeiss continued to operate in its original Jena, but a new factory was built in Stuttgart in West Germany. After German reunification both ‘companies’ became one again.

This is the latest iteration of the Varex range of cameras. After this they were made in Japan!

The founder of Exakta, Johan Steenbergen, tried to re-establish his company in Frankfurt, West Germany in the late 1960s. For litigation reasons the East German Ihagee company had to relabel the exported cameras Elbaflex (after the River Elbe in Dresden). I bought two examples of these from eBay, one working with a f2 Zeiss Pancolor lens, and a spare non-working body. Below they can be seen with the the 50mm lens (left) and the wide-angle F4 25mm Flektogen (right). As this camera is in perfect working condition I intend to put in a film to take some more architectural photographs. The Elbaflex was the last true IHG camera made in Dresden, subsequent Exaktas were made in Japan!! 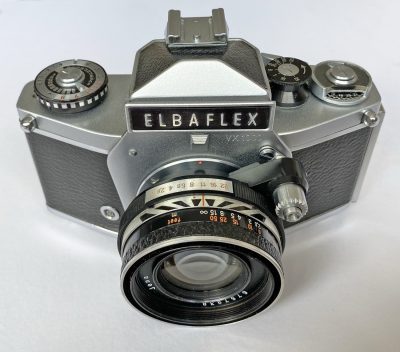 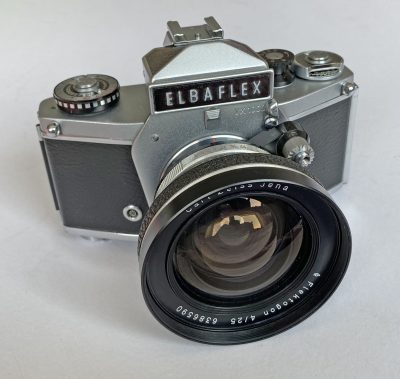 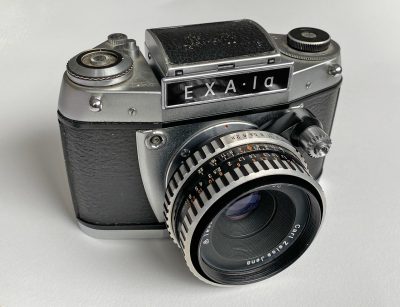 This was the less advanced sister model. It had a simple but ingenious shutter with fewer speeds (max 1/175th), which instead of a focal plane used the mirror as a shutter. It still took the normal Exakta mount lenses and the pentaprism/waist level finder. The later Exa II had the pentaprism incorporated and would no longer accept the waist level finder. The lens fitted is the Tessar from my Exakta IIb (see above). The earlier model ‘I’ did not have the lever wind.

In 1966 Dutchman John Steenbergen attempted to relaunch his company in West Germany with the Exacta Real. To make this he formed a company “Ihagee Kamerawerk AG” in West Berlin. Unfortunately, in spite of being more advanced than the Dresden Exaktas, they weren’t successful and very few were made. Consequently they achieve very high prices due to their rarity and high quality. The picture below is from Flints Auctions. The original Ihagee company were therefore forced to rename their cameras “Elbaflex” (see above). 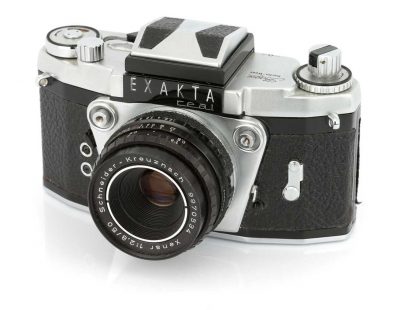