Cameras have been made in Japan since the early 20th Century, the first lens factory opened in 1907. The First World War brought on a rapid growth in the optical industry through a military hungry for optical products of all kinds.

The First World War brought on a rapid growth in the optical industry through a military hungry for optical products of all kinds.

In 1917, Nippon Kogaku Kogyo Kabushikigaisha (Japan Optical Industries Co. Ltd.) was founded to design and produce lenses for a wide variety of equipment and devices. It eventually slid into the manufacturing of cameras having supplied lenses to several camera manufacturers, including Canon, and in 1988 it finally changed its name to the name its cameras were known by: the Nikon Corporation.

My collection started with my first Japanese camera, the Miranda F. Now I have various cameras, mainly Nikons and Minoltas, the favourite makes of my late father.

In 1964 this camera was widely praised in by a test report in the AP (Amateur Photographer) by Neville Maude, particularly the quality of the f1.9 50mm lens. After Miranda closed down Dixons bought the name and remaining stock.

According to camera-wiki “The 1963 Miranda F was the first of the “modernised lever winders”, comprising the F/FM, G, and Fv. The models used the chassis of the previous DR (the last of the “lever winders” comprising the A, B, C, D/DR), and were designed to accept new lenses with an internal automatic diaphragm coupling. The camera body retained the previous series’ front of body shutter release button used in conjunction with earlier PAD lenses. The F also introduced a new speed selector dial, which did not have a separated high and low speed selection, and didn’t spin when the shutter was released. The F gained an optional screw-in, top-plate located shutter release button facility, via a cable release port”. 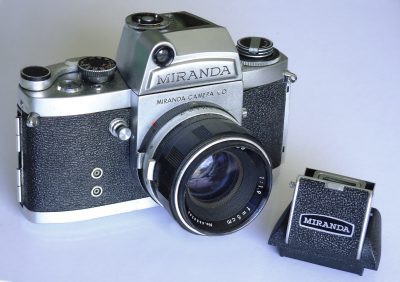