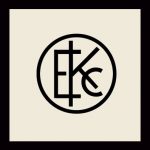 This page is concerned only with Kodak cameras made in the USA. The logo above dates back to 1907 and is the initials of the original company name – the Eastman Kodak Company. 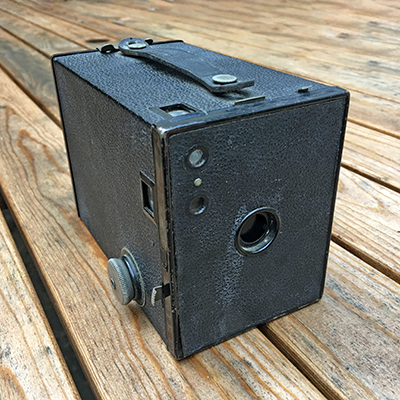 The Box Brownie was invented by Frank A. Brownell in 1900. According to Wikipedia “The name come the the brownies (spirits in folklore) in Palmer Cox cartoons”. It took 2¼” square film.

The No.2 was an improved version which came out in 1901. It cost $2 and many thousands were produced. Brownie Box cameras were finally discontinued in 1935. 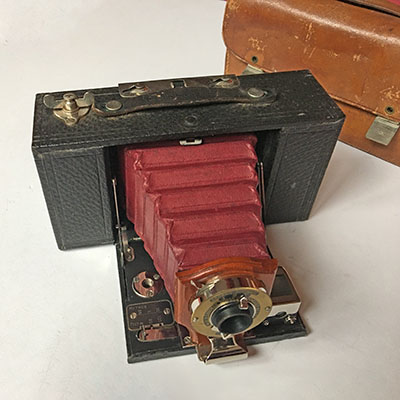 From August 1911 the attractive red bellows were dropped, black being used instead. It was discontinued in 1915.

The Kodak No. 2A Folding Pocket Brownie is an early folding camera introduced by Eastman Kodak Company in 1910 at a price of $7 (about $170 in today’s money). The No. 2A is designed for the now defunct 116 film format which is very similar to 616 but with wider spool flanges. While we may think it’s a bit strange for Kodak to name this brick-sized camera a “Pocket” Brownie, it was considerably more portable than many of its contemporaries.Operation of this beautiful camera is fairly straightforward and simple. To unfold the camera, a hidden button located between the hand strap lugs on the top plate must be pressed to release the lens. Once the camera is unfolded, set the focus distance by adjusting the focus tab on the user’s right side of the lens rail and pull the lens out to align with the tab. Composition can be determined by using the right angle viewfinder on the opposite side of the lens rail. The viewfinder is set for landscape orientation by default but can easily be rotated 90 degrees for portraits.The aperture of the Brownie’s simple meniscus lens has four settings that can be selected by sliding the tab underneath the lens: “1” is f/8.8, “2” is f/11, “3” is about f/14, and “4” is f/16. The Brownie Automatic shutter has only three settings which can be set by sliding a similar tab above the lens: “I” (about 1/25 seconds), Bulb, and Time. Once everything is ready, press the shutter lever at the 10 o’clock position on the lens barrel to make the exposure and then wind the knob on the top plate to advance the film until the next frame number appears in the back plate’s red window. 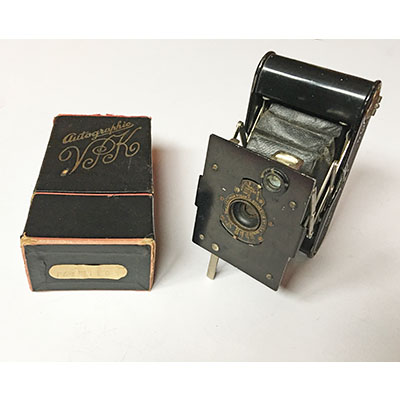 According to Camera-Wiki “The Vest Pocket Autographic Kodak was the version advertised in the U.S.A. as the “Soldier’s camera” during World War I. It was very successful, selling 1,750,000 units. It was of the compact strut folding type and had the meniscus lens or a U.S.-speed 8 Rapid Rectilinear lens. The camera back had an area through which notes could be written onto the paper backing of the 127 film, the “autographic” feature – invented by Henry J. Gaisman”.